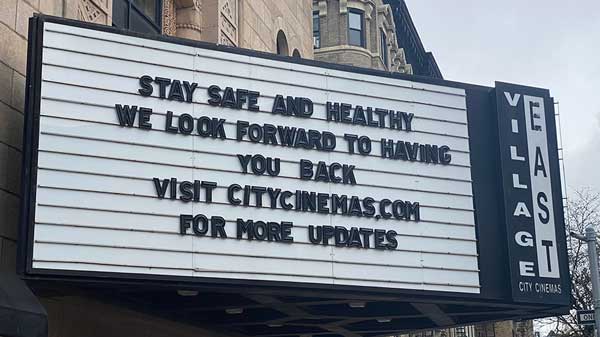 After nearly a year of closures, New York Gov. Andrew Cuomo has given movie theaters in New York City permission to reopen at limited capacity starting on March 5.

During his daily press briefing, the Empire State leader said cinemas in the city will be permitted to operate at 25% capacity, with no more than 50 people. Moreover, other safety measures such as masks, social distancing and heightened sanitizing measures will be required. Last October, New York venues outside of the city were allowed to reopen with similar restrictions.

The announcement comes days after the governor gave large arenas like Madison Square Garden and the Barclays Center permission to reopen beginning Tuesday at limited capacity. Likewise, outdoor amusement parks will be able to welcome guests starting April 9. Broadway, however, is still closed and it is unclear when those theaters can reopen given that producers are skeptical they can operate profitably with limited capacity.

Despite the restrictions, the news is welcome for movie theater owners whose locations have been empty for almost 12 months due to the coronavirus pandemic. It also could encourage studios to begin releasing bigger films, something they have been hesitant to do when a major market like New York City is off the table. Theater stock soared following Cuomo’s announcement, with shares of AMC jumping more than 13% and shares of Cinemark climbing more than 7.5%.

The theatrical film business has been battered by the pandemic. Cinemas nationwide have been trying to stay afloat with reduced or zero income since the pandemic started to spread last March. New York-based film exhibitors had been publicly sparring with Cuomo in recent months about the governor’s reluctance to let cinemas reopen. They felt it was unfair that indoor restaurants, sporting arenas and other public-facing institutions had approval to welcome patrons back even as movie theaters were left in the dark.

“We’re still in a pandemic,” Cuomo said, and often repeated, in October of 2020, brushing off any criticisms about his reopening model. A winter surge in cases seemed to justify that hesitancy.

However, the coronavirus infection rate has reached below 3% for the first time since November. That statistic, combined with the ongoing vaccine rollout, has given state officials confidence to let cash registers in theaters ring again.

There are still complications. During Monday’s press conference, Cuomo said that movie theater employees do not qualify as essential workers when it comes to receiving doses of the COVID-19 vaccine.

“Not every business that is open has a [vaccine] preference for those employees” said Cuomo, adding that “we just simply don’t have enough supply.”

Cuomo’s timeframe is tight, but major chains such as Cinemark and AMC have grown accustomed to reopening their theaters, in cities like Chicago and Portland, within a matter of days. That experience means the March 5 date for a grand reopening seems feasible for many theater operators.

Adam Aron, the CEO of AMC Theatres, called the reopening of New York City cinemas “another important step towards restoring the health of the movie theater industry.” AMC, the world’s largest cinema chain, will open all 13 NYC locations on March 5.

“We will do so with the highest devotion to the health and safety of our guests and associates through our AMC Safe & Clean policies and protocols, which were developed in consultation with Clorox and with current and former faculty at the prestigious Harvard University School of Public Health,” Aron said.

“AMC Safe & Clean includes social distancing and automatic seat blocking in each auditorium, mandatory mask wearing, and upgraded air filtration with MERV-13 air filters, as well as many other important health, sanitization and cleanliness efforts,” Aron continued. “We look forward to welcoming back our New York City guests to the big seats, big sounds and big screens that are only possible at a movie theatre.”

The National Association of Theater Owners, the film exhibition industry’s main lobbying group, released a statement shortly after Cuomo’s announcement to signal the group’s appreciation. Across the country, NATO notes, cinemas have been operating “safely and responsibly” at higher capacity limits for many months without any outbreaks of COVID-19 being traced to theaters.

“New York City is a major market for moviegoing in the U.S.; re-opening there gives confidence to film distributors in setting and holding their theatrical release dates, and is an important step in the recovery of the entire industry,” a NATO spokesperson said. “We look forward to expanding the capacity from 25% to 50% in the very near future so that theatres can operate profitably.”