A Los Angeles home where Katharine Hepburn lived early in her Hollywood career and Boris Karloff at the height of his career is for sale. Hepburn, who was the queen of romance movies, and Karloff, who was the king of monster movies, occupied the home that is still owned by people with film-industry connections. The 5,000-square-foot, hacienda-style home has recently been placed on the market, priced at $8.995 million.

When Katharine Hepburn made the transition from Broadway to Hollywood in 1932, she rented the home and lived in it for the next five years. Katharine had been discovered by a Hollywood talent scout in New York during her performance in The Warrior’s Husband who invited her to do a screen test for Joseph P. Kennedy’s RKO Pictures. Katharine was so different from Hollywood’s other stars that famed director George Cukor referred to her as an “odd creature.” Her independent style and business acumen turned her into one of the world’s most popular stars for the next 60 years.

In 1938, Boris Karloff bought the Bowmont Drive home after he attained star status in the horror-film genre for his monster characters in Frankenstein, The Walking Dead and others. He continued to live there until 1945, enjoying his passion for gardening and turning the grounds into a tropical paradise.

Built in 1927, the five-bedroom, six-bath home appears to rest on a cushion of shrubs and flowers with terraces, two outdoor fireplaces, lawns and steps leading down to the swimming pool. Inside, whitewashed brick walls are balanced by wood or tile floors and wood ceilings with beams. With six interior fireplaces added to the two outside, there are many choices where one can cuddle up by a blaze on a chilly evening. A perfect home for entertaining, its walls must have many stories to tell, from the large kitchen to intimate conversation areas and garden spots among tropical blooms, roses and fruit trees.

The charming hacienda where Katharine Hepburn and later Boris Karloff once lived is now for sale in Hollywood’s celebrity-rich 90210 zip code. Priced at $8.995 million, the listing agent is Brendan Fitzpatrick of Douglas Elliman, Beverly Hills. 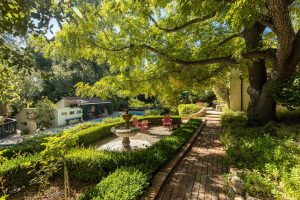 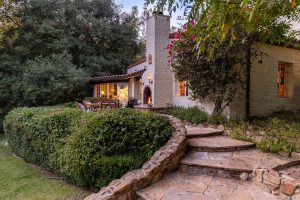 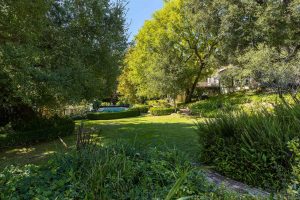 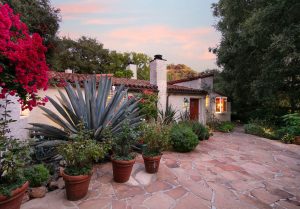 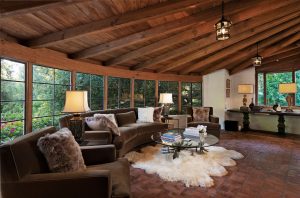 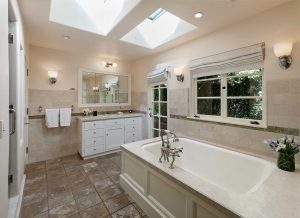 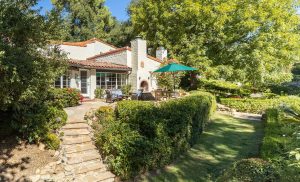 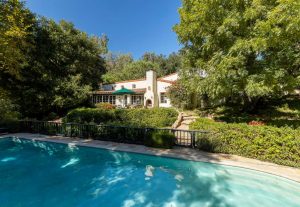